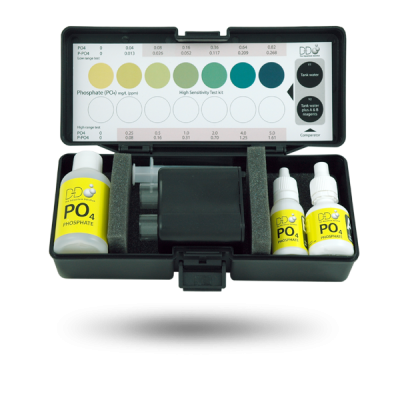 Maintaining a low level of phosphate (PO4) is crucial for success in marine aquaria. Excessive levels of phosphate can give rise to increased algae populations, act as a calcification inhibitor in stony corals and clams, and is a limiting factor in achieving good coloration in stony corals.

We advise that the Phosphate Kit is used as part of a complete testing regime that includes the D-D Multi, Nitrate and Iodine test kits for best results and to help monitor complete aquarium health and nutrient levels

Natural seawater has an average phosphate concentration in surface waters of around 0.005 ppm PO4 with levels below 0.1 ppm PO4 being recommended for aquariums containing stony corals up to perhaps 0.25 ppm PO4 for more tolerant species. Levels below 0.005 are also undesirable however it is unlikely that you ever achieve a zero phosphate state due to the amount of phosphate added during daily feeding.

This high sensitivity test kit will allow the user to monitor levels of phosphate measured as PO4 or P-PO4 within the aquarium so that they may be maintained by way of regular water changes and by way of phosphate removing medias such as Rowaphos.
The test kit has both a high and a low range scale allowing it to be used to determine the exact level of phosphate in your aquarium.
Product Code - TEST-PO4