A COMMON MISCONCEPTION WITHIN THE INDUSTRY IS THAT 3W LED CONSUMES 3W OF POWER, 10W = 10W ETC.

A WATT IS A WATT RIGHT?

This misnomer comes from the early days of LEDs, which is a legacy of traditional lighting sources. A 54W T5 uses around 54W, and a 250W metal halide uses around 250W. (both actual values are dependent on the ballast)

A Cree XP-G emitter may be driven at approximately 5W. This value is calculated by 1.5 amps multiplied by a forward voltage of 3.3V. Now, just because it can be driven at 5W doesn't mean there is benefit in doing so.

As the LED is driven at higher power levels, the temperature of the device increases and its luminous efficacy is decreased. What this means is that one LED system may be driven at 5W per XP-G achieving 63 lumens per watt while another LED system drives the same XP-G at 2.5W and achieves 84 lumens per watt. This is over a 25% difference in system efficacy!

In this example, the XP-G LED driven at 5W is outputting twice the light as the 2.5W, but in doing so runs at a higher temperature (decreasing lifespan) and operates at 25% less system efficacy.

On the same line of discussion, many manufacturers advertise their LED system in a rather misleading manner, in two ways.

Example: Brand X has 110W of LED per foot of fixture.

At C2D we advertise the AI Sol, and all of our products stating the power consumption from the wall. The AI Sol Blue (and White) uses 74-75W depending on the power meter used and temperature of the room. If you break this down, it consists of each of the Cree XP-E Royal Blue and Blue emitters run around 2.6W and the Cree XP-G Cool White runs at just under 2.5W. The control circuitry, fan, and power supply inefficiency brings the total power consumption to 74-75W. 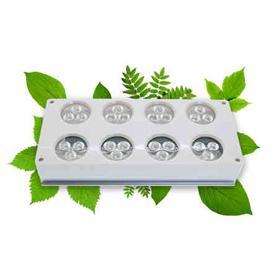