This article is by Alexandra Broadhurst an up and coming young 10 year old reef-keeper on her own Nano-Cube and in her own words.

Hello my name is Alexandra Broadhurst and this is my nano cube which I have had since Christmas 2006.

My Mum and Dad bought it for me as a special surprise, when I woke up on Christmas morning there it was - my very own Nano Cube! I love it.

Since I have had it I have added lots of corals to it.

I have two black and white clownfish named Skitty and Skatty, I also have a firefish named Flicker and�lots of corals including: brains, goniopora, ricordea, pulsing xenia, montipora, echinopora,acropora, bubble, mushrooms, candy canes, zoanthids, dendrophyllia, (I bought 1 small dendro and me and my dad split it into 4).

i also have 2 small feather dusters and 1 small coco worm.

I also have 2 funny shrimps one named Polo, because he's a peppermint shrimp and one called Mr Shrimp because, well he is a shrimp! (he is a blood�shrimp.)

I am now trying to convince my Mum and Dad to help me open a small coral farm in our conservatory. I hope to grow and sell many corals.

I have 5 dwarf hermit crabs but they keep swapping shells so I dont know which one is which anymore!

I also have some Nassarius snails.they keep my tank nice and clean for me. 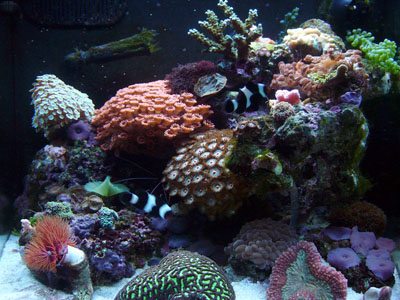 I change a bit of water every weekend and I feed my fish every 3 days with half a cube of brine shrimp or mysis shrimp. I feed my corals every day with a mixture of different foods,frozen �cyclopeeze, phyto, microvert, amino life. Twice a week i squirt food onto the corals with a big, long pipette.

I am interested in corals and would like to start my own business because it is hard to find corals small enough to fit into nano tanks. 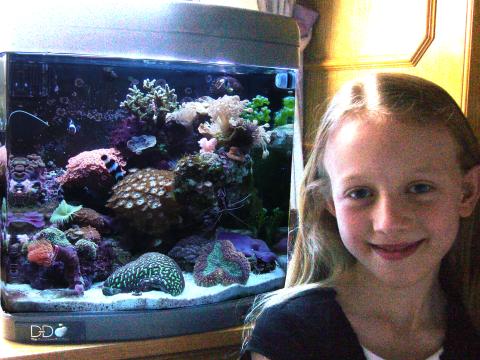