It has come to our attention that a number of companies are supplying the basic freshwater tank from which the Nano-Cube was first developed and passing it off as a marine system or even identical to the Nano-Cube.

These lesser copies are always cheaper and are therefore attractive however if you want a freshwater tank for marines then there are hundreds available for very little money.

These aquariums are actually made in the same factory as the Nano-Cube and therefore on the surface the look almost identical at a casual glance however the specification is completely different.

D-D had the opportunity during INTERZOO to distribute these cheaper models but decided that the excellent work that JBJ had done to produce a true marine version was well worth the relatively small amount of extra money.  We like to believe that we only sell products that we know have been developed and are suitable for the use that they are intended.

How much would it cost to double or triple the amount of light for your freshwater version?

The main problem with converting any freshwater tank is that there is never enough light and the spectrum of the bulbs is almost always wrong.

The D-D Nano-Cube is fitted with 2 x 36W 14000K Power compacts giving sufficient light and the correct spectrum for corals and anemones.

How much would it cost to keep your tank cooler in the summer?

One of the issues when increasing the amount of light is that you increase the amount of heat produced from the ballast and from the light fitting itself this goes into the water and suddenly you have a problem.

The D-D Nano-Cube has a remote ballast to take the heat away from the tank and even though it is in a well ventilated ballast box it still gets quite warm. I certainly would not like that amount of heat in the hood of my tank.

Noise is one of the things that people find most irritating about an aquarium.

The D-D Nano-Cube has fans fitted to the hood of the tank to pull away any heat generated by the bulb itself. The earlier models sold in America used a cheaper fan which was found to be very noisy so the Nano-Cube is now fitted with a ball race fan to make it almost silent.

How much would it cost to buy a set of moonlights for the freshwater version?

One nice feature on the D-D Nano-Cube that is not present on a freshwater tank is the installation of 2 LED Moonlights. This bathes the tank in light after the main lights have been switched off.

What is the cost of finding your aquarium all over the floor?

Experience in America with the earlier Nano-Cubes, which were based on the standard freshwater glass thickness, showed that extra load from the weight of live rock etc when used as a marine aquarium could result in the glass cracking after a couple of months of use.

The D-D Nano-Cube has the glass thickness increased by 25% to prevent this from happening in the future.

How often will you have to siphon off that surface scum layer?

The freshwater version has a series of points down the depth of the filter system to take in water. With a salt water system the proteins and waste tends to collect on the surface which looks unsightly and blocks out light.

The D-D Nano-Cube has a single point near the surface of the water where water is taken to the filter system. In addition it is fitted with a removable overflow comb or MSS which skims off the greasy layer and gives sparkling clean water.

We at D-D decided to distribute a more expensive aquarium as in our experience it showed itself to be better value for money to the marine aquarist - we still believe this to be true.

What you spend your money on is up to you at the end of the day but ask yourself - is the money you could save today really worth it in the long term life and health of your aquarium. 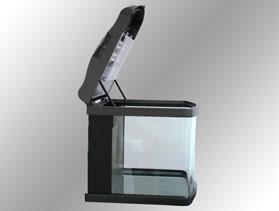