I asked Daniel Knop the well known German aquarist for a review on the Eco-Cooler that I know he runs on his 8000 lt system in his basement. Bear in mind that the recommended tank size for this model is only 2000 lts.

Well, I simply love the system, and after all evaporation has been a known way of cooling aquarium systems for many years, I was surprised that it took so long until someone has designed an evaporation cooler with an extremely small footprint. I don't know if you have been at MACNA - I have introduced the system in one of my presentations.

In my case I even have two benefits from the unit: aside from the cooling effect it increases the oxygen supply of the water. Also I have placed it in a way that allows to blow the air from the unit to the halide lamps, a way to get a further temperature decrease of of the tank water. The only way to give some more improvement would be to blow the humid air from the unit directly out of the room. I may thing of a way to do this some time in the future, to reduce the humidity in the room.

My system consists of a 6000 litre tank plus 15 small tanks with 140 litres each. They are all combined, so in total I have about 8000 litres of water in the system.

Before installing the unit, during summer my water temperature always went up to 31 or 32 degrees, and during winter it did never go below 29. With no counter measures the summer temperature would easily go over 32, mainly caused by the two 1000 watt halides and the fact that the setup is situated in a cellar room with relatively poor exchange of air.

Since I have set up the evaporation cooling unit, my water temperature does not exceed 25 degrees during summer. During winter it would certainly be much lower if I would not reduce the number of electric fans in operation.
During winter I just operate 1 or 2, while in summer I use all 4 of them.
But even during winter I don't want to switch the unit off because of the improved gas exchange. My foam fractionator gets water supply from the large tank, but it feeds the skimmed water to the 15 small tanks. So I am a bit afraid to have a lack of oxygen with my group of large Naso tangs in the big tank without operating the evaporation unit.

I can highly recommend the use of this unit instead of a conventional chilling system. If you have any more questions, please let me know. 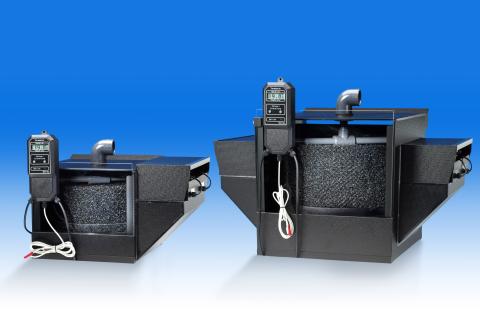