This can be quite normal and is a result of the salt water that they have produced not as yet being mature enough for the high performance of the Deltec protein skimmers.

Many brands of salt used for aquarium water are made up from component parts to reproduce the elements found in natural sea water. One of the additives introduced to many salts is a conditioning agent which is put in to react with heavy metals and toxins in the water and neutralise their negative effect.

The down side of this additive is that it can increase the surface tension of the water and enable bubbles to hold their form much longer than would be natural with mature salt water.

This effect disappears as the water stabilises and reacts with waste in the system but until it does it causes many people concern which results in a call or an email to us.

To convince yourself of this fact just look at the bubbles in the skimmer cup. They effervesce like when you open a bottle of fizzy drink, which is not how mature water reacts in a protein skimmer. The bubbles also smell very clean and when you watch them in the tank you will see that they do not burst for an unusually long period of time.

Once the water has matured or the conditioners have been skimmed out then the problem will go away.

These comments are most often reported on the MC500 and MCE600 models, probably as these are more often bought by people new to Deltec Protein Skimmers or with new tank setups however both of these issues are indicative of the water maturation issue detailed above.

This problem is uncommon on many basic, low air volume protein skimmers and is indicative of the incredible amount of air produced by the Deltec units and the small size of the bubbles.

What is the Solution?

The only solution to this issue is to until the water matures so that the surface tension drops and the bubbles disappear. This process can take from a few days to a number of weeks to clear completely but can be accelerated by observing the following tips.

If the cup is overfilling with bubbles try smearing a little Vaseline around the top of the cup and air vent to burst the bubbles and to run the clear liquid back into the skimmer.

Please note that the pumps on the MC500 and MCE 600 either pump water, when the air tap is closed, or an air water mix when the tap is open. Many people when they start seeing bubbles appearing in their tank instinctively close down the air supply which reduces the air intake but also increases the water flow and washes the everlasting bubbles out of the skimmer and into the tank.

Out of all of the people that we have explained this to, nobody has come back to us after 2-3 weeks and said that the observed problem had not gone away. 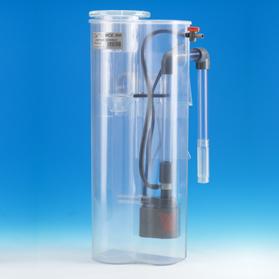