On occasion it maybe nescessary to bootload your light back to a factory state without any firmware loaded.

This may be due to interefernce during a firmware update that crashes the process or another control issue that has caused a light to become unresopnsive such as the light being too far away from a Controller or Director or a wifi channel selected with too much noise or interference on it (channel 9 is usually pretty noise free).

A bootload should rarely if ever be required however

Step one - Power up the light

The light should now be set into Bootload mode and will require a firmware update as below:

Before you bootload the light remove it from the light layout by dragging the light into the discovery box and delete it by clicking the x at the top right of the light icon and select save.

You will then be prompted to update the firmware

After the update you will be asked to remove the light from the layout as per the instruction on the first line above, now rediscover the light and click save once you have dragged it back into your layout.

After a bootload you may find the light flashes sporadically, this is normal and a fresh firmware update will clear this. 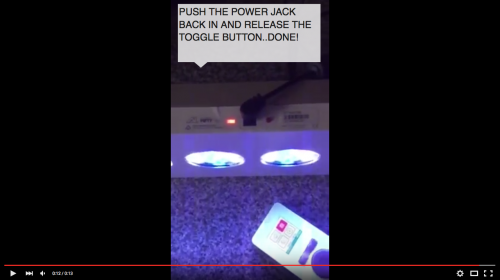