When working with corals frags it is recommended that tweezers are used to push the cut section into the putty as residues from your hands or gloves may reduce the success or speed of initial recovery and growth of the coral.

If positioning large corals we would suggest that you first fill a bucket or container with water from the aquarium then apply the Aquascape to the coral base and splash it around in the bucket to remove any further residues. Push the coral into position and prop if necessary until the putty sets.

Clams are very susceptible to attack by bristle worms, especially when positioned on a sandy or gravel substrate. If you have had clams die in the past then this is probably why. The worms attack the base of the clam at night and slowly eat it from the inside.

If an Aquascape base shaped to the individual clam is used then the clam will glue itself onto the base thus sealing itself from attack.

To create the clam base first mix the putty and form it into an inch thick elongated pancake. Press the clam onto the Aquascape to make an impression, remove the clam and place the putty in water to allow the colour change to take place and leave to set. Position the clam on the base inside the aquarium. The clam will now glue itself onto the Aquascape base and protect itself against any attack.

Coral branches (live rock) can be prepared to make it easier to fix live corals to them by pre-drilling 5-10mm holes in suitable positions. Corals attached to dowels of Aquascape can then be inserted into the holes. Prepare the dowels 24 hours prior to use with flattened ends and use further putty to attach to the chosen coral or frag. Support the dowel and leave to set for 24 hours before bonding into the hole in the coral branch.

Rock structures should always be secure to prevent rockslides from occurring once the aquarium is established with subsequent damage or disturbance to the system.

Blobs of Aquascape can be used to create feet on the base of the foundation rocks for increased stability and to lift the rock off the substrate thus preventing anoxic areas from developing.

To stop the rock from sticking to the glass, place a sheet of Clingfilm under the foot whilst it sets and then remove it.

Having established a firm foundation, subsequent rocks can be fixed into position using a combination of cable ties for support and Aquascape for a permanent bond.

Tall pinnacle structures can be created by drilling the rock and sliding the pieces onto a length of PVC pipe as a supporting backbone with Aquascape to fix them together. Aquascape will even bond rocks to glass. 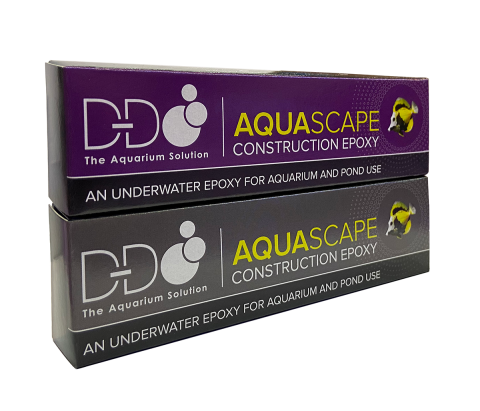