TIPS ON HOW TO AQUASCAPE YOUR REEF TANK AND FRAG YOUR CORALS, PROTECT YOUR CLAMS AND DO SOME LOCAL REPAIRS.

As a fanatical hobbyist over many years and a scuba diver, it was essential if I was to have a reef tank in my home that the aquascaping was reef like and aesthetically pleasing.

Approximately thirty years ago I decided to investigate how reef scaping could be achieved. It was necessary at that time to do your own experiments as no aquascaping products were available and SPS corals were to dream about.

On my travels I came across many types of glue some of which are used for aquascaping today even though their primary function was to repair boats, cars, etc.   When used they often looked ugly and conspicuous for many months, however, they did ensure that the rock work could be made to look like a real reef, with caves, branches, islands, etc.

This also prevented rock collapses caused by turbo snails, sea urchins, hermit crabs, etc. by securing the rock work, these creatures, which were very necessary to a reef tank in those days, as algae was a major problem, were put in tanks in numerous numbers to battle the dreaded slime algae. Today, we have the luxury of this being a thing of the past through the use of phosphate controlling substrates like Rowaphos.

Having come across an epoxy glue, which would set under water and was inert if used correctly, I set about decorating my reef tanks. I found I could achieve a fresh new natural appearance compared to the usual banked up piles of rocks, reminiscent of a fruit stand, which up until that time most hobbyist were creating. It allowed me to try all sorts of weird and wonderful ideas about flow pipes at the back and hidden glass props, so that the detritus did not collect in one spot causing ammonia and NO2 spikes.

Although the glue I found was still a conspicuous color until overgrown with coralline algae, it set rock hard and was supplied at an affordable price as its primary use was for modeling.

We approached the company that manufactured this glue and discussed improvements that we thought were necessary to make it better for use in the aquarium. SPS corals were now beginning to come into the trade on a regular basis and it was important to be able to glue the frags or the corals into position on the rocks sometimes balancing them precariously on rock over hangs. We developed the color of the glue to represent coralline algae so that when placing new items in the aquarium they did not look ugly and out of place for several months.

Clams are very prone to attack by bristle works and other critters of that type on a sandy gravel substrate, if you have lost some clams in the past they have possibly died because their foot was exposed to hungry seeking bristle worms through the gravel.

By making a ball of the epoxy putty and carefully pressing the clam into it you can form an impression of the base. You should then allow the aquascape to harden before placing the clam in its own impression, within a very short space of time, the clam will attach itself to the aquascape, sealing its shell and making it very difficult for it to be attacked from the base.   Even when knocked over by a predator fish the base will follow it making it secure from being attacked from beneath.

Over 400,000 packets of Aquascape have been purchased by hobbyists worldwide and it is recognized as a must for the hobbyist who wishes to replicate a reef structure in their aquarium.  Corals, plastic pipes, and rocks are all capable of being glued directly on the glass under water even when the tank is full.

If you wish to learn more about this product go to our web site www.theaquariumsolution.com  and read the instructions and tips on use of Aquascape. 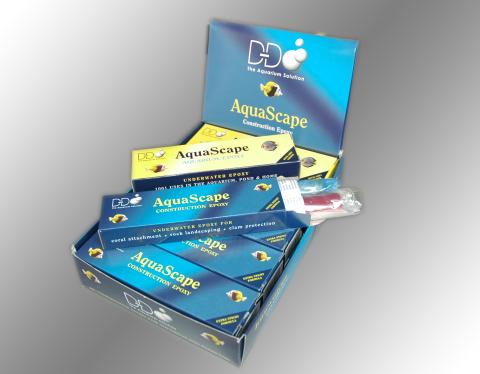